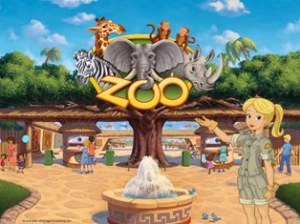 Let me tell you the harsh truth about the  job of a zookeeper.It’s not always that the job of a  zookeeper is  funny and love-able like “Kevin James” of the movie ” zoo keeper ” .

okay this zoo keeper has a different story altogether. (

unless u guess what it is ) . Now follows his story in his own words.

I am Alexwa the zookeeper of Ghotala zoo , located in the foothills of the Himalayas ,,,,  the Shiwaliks.

Usually animals are said to be more faithful , caring and passionate , and it’s true , but my zoo consists of different kind of animals . The ecosystem of animals shares  symbiotic relation but here there exists a parasitic relationship . One feeds upon the other,,,,,,,,, .

. If u still don’t get it continue reading.

According to Darwin , the fittest survives, but here the the most selfish survives.Let me introduce you to the animals in my zoo. The head of the zoo – a gorilla called kaliya ,  a langur called hadbadi ,  a chimpanzee  called kanijusva,  a cat  called goraiya , two Alsatian dogs one is BBC the other is dainik jagaran , a squirrel called chupiya , a donkey called shramik , a mynah called ladli ,   a mongoose and a squirrel .

Okay the hadbadi , kaliya and kanijusva are thickest friends but not friends in truest sense , they become friends where they smell a great meal

. Their stomach’s are larger than their body but brains much smaller . Out of the three the hadbadi is the most cruelest , it has all the traits of a snake , fox  and vulture (   3 in one

BBC and dainik jagran are friends from their childhood.These wild dogs are not only predators but good journalists too

The ladli ( or the mynah ) feels she is more beautiful and wear’s a ring around her neck called the super ego .

The goraiya ( cat) is always watchful and careful , and he doesn’t get involve  in the cruel acts of other’s .

Usually the snake and mongoose quarrel each other but here the the mongoose and squirrel always quarrel with each other.

The shramik(donkey) is introvert ,and shy but little playful . It is the youngest of all  .

Everyday , hadbadi and kanijusva sit atop the shramik ,  hadbadi makes loud different noises everytime and kanijusva hits the donkey at the rear . Shramik , being  shy used to bear all the brunt and carry the load sincerely . BBC and Dainik jagran used to bark along all the way , running along side shramik , making it feel as if they are with him .

5 thoughts on “The zoo keeper”