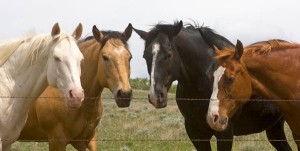 Nanda used to be an excellent jockey . Now he spends most of his time with his beautiful breed of horses  in his modest farm. Among the herd ,Nanda used to adore  a family of four . They were one of the best breeds imported from Arabia.

Sadhwi and Sahaj are wife and husband with two beautiful young daughters chameli and chanchal .Sadhwi  is extremely patient horse with brownish tinge. Sahaj is an honest , faithful with strong masculine features. Chanchal is very naughty,cute , youngest of all and a skillful golf player with light pinkish tinge on her skin. Chameli  is bright , young responsible , with yellowish tinge and has won 2 races.

Chameli has now grown up  , Nanda wanted to marry her off to an eligible male horse. He started searching for suitable groom and spread the word to all the nearby villages. After sometime , calls started pouring in,,,,,,,,

He invited some of them to visit his farm along with prospective groom. Lomdi was the owner of gadha , he took it  to Nanda’s farm on invitation. When Nanda  tried to open the mouth of Gadha he was astonished to see the donkey wearing the skin of horse. ” Goshhhhhhhh ,,,, ” he thought,,, ” A  donkey for a horse ??????????”

Then came Kaalu with a hefty black horse to Nanda’s farm . He demanded that  Chameli should be dressed in traditional attire . After all the hungama created by him subsided , he cursed Chameli for winning all the 2 races in which his hefty , lazy  horse lost. Infuriated by this ,Nanda asked him to leave at once.

Then came Lalchi mamu with his weak malnourished goat . Nanda was speechless , wondered why  did lalchi come without an invitation. Lalchi inspected chameli head to toe for more than an hour . He was very much happy and enthusiastically asked Nanda to fix the marriage date. By now , Nanda was aghast. ” A shiny black horse for a malnourished goat??????????”. He asked the same to Lalchi mamu. In a very optimist tone he said ” Why not ? , after all u want chameli to get married to someone one day or the other . Just put on the makeup of bakri (female goat in hindi ) and marry her off to my brightest goat (bakra) .  On hearing this Nanda lost consciousness , on regaining himself after some time he sent off Lalchi mama .

Nanda  is still in search of an able horse for the prospective  bride , chameli .